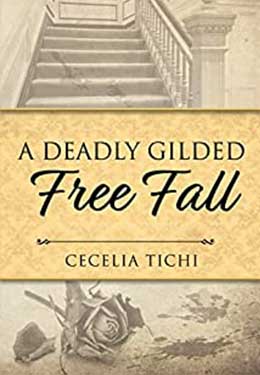 Toxic medicine, a fanatic Chicago detective, and a fatal plunge down a steep staircase embroil Val and Roddy DeVere in a dangerous quest for facts in 1899.

Toxic medicine, a fanatic Chicago detective, and a fatal plunge down a steep staircase embroil Val and Roddy DeVere in a dangerous quest for facts in 1899. Roddy’s fledgling business teeters as his partner begs him to free him from a detective’s “witch hunt.” The question: was the partner’s wife’s fatal free fall an accident? Or was it murder?

by Ruth McDaniel
Reviewed in the United States on September 5, 2022
Verified Purchase

My first time to read this author

I first need to say that I have not read the previous books in this series, so there were obviously a lot of events mentioned that I did not know about or understand. However, there was just enough mention of past events that I didn’t feel totally lost.

I found the writing style to be a little bizarre. Lots of dashes – and dot dot dots…. But it wasn’t so bad that it spoiled my enjoyment of the story.

The scenes were well described so that I could get a good sense of place and feel as though I were actually there myself. Each character was well fleshed out and nothing felt “fake”.

The mystery was very well done and while I sort of guessed who the culprit was, I wasn’t actually sure until they were revealed.

I also enjoyed the history of various things and places in the book. While it was fiction, there were actual events mentioned in the book.

In my view, this was a good read and I quite enjoyed it. I believe I’ll go back and read the previous books, as well.

I received an ARC of this book and have left my review voluntarily.