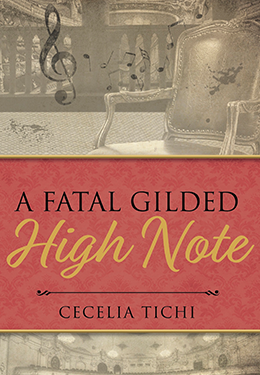 New York’s “Diamond Horseshoe” balcony in the Metropolitan Opera House glittered with ladies’ jewels in January 1899, and Society seated in private boxes heard Mozart’s murder victim sing his song of death-unaware that the sudden death of a “Coal King” in Box 18 will be ruled a homicide.

When opera-goers Val and Roddy DeVere are asked to investigate (“on the q.t.”), Val finds herself suspected of complicity in the murder.

The police have “material evidence” against her. Before a jury, Val’s lawyer husband reminds her, “‘material’ evidence can be the bright, shiny object that overrides all reason and fact.”

by KymmLisa
Reviewed in the United States on March 17, 2022
Verified Purchase

I’m so glad I found Cecelia Tichi and her Gilded Age series! Cozy mysteries are my escape after I’ve read several big, complex and/or intense books where the content requires a lot of concentration and thought. It’s these cozies that allow me to enjoy a great story, have a few chuckles and give me that refresh every reader needs from time to time.

In “A Fatal Gilded High Note” the story of Roddy and Val, the high society couple who live in Gilded Age New York City are back at it, but this time when they’re at the opera enjoying the show in their exclusive box, they’re disrupted by a murder in the box right next to them. Soon the police are asking Roddy and Val to help out with the investigation on the “QT”, which is nothing new, since they’ve been helpful in the past. And this time the police find “material evidence” that links Val to the crime, so it’s vital Roddy and Val figure this one out quickly!

I just love Roddy, Val! They’re such a cool couple and definitely not the norm for the Gilded Age. Val is a gal from the Wild West and doesn’t conform to New York society’s rules for a “lady,” she’s one go getter and doesn’t care what others say about her. After all it’s her family’s money that the couple counts on. Her father made a killing in silver out west where Roddy and Val met when Roddy was taken there as a young man to “dry out.” What’s really cool is Roddy’s hobby as a mixologist is a big part of the book Tichi gives the reader the recipes for all his exotic drinks. I don’t drink, but it’s a fun part of the storyline.

These books make me laugh, they’re good mysteries that I try to figure out as I’m reading, and the characters are great, but Roddy and Val are so cute together I picture them as a stuffy high-class couple out on their walks or lunching at the club and laughing together, just having fun. They seem like they’d be great friends to have! I’m hooked and so glad to know there’s another book on the way, as I learned when I finished this one. Anything about the Gilded Age grabs my attention, but these books present it in such a fun way it’s really entertaining, and Val is so independent and unlike a lady of the era it’s refreshing. She bucks the system and Roddy is right there with her supporting everything she does! it’s just great cozy mystery fiction and I can’t wait for more! Oh, and I can’t forget their French Bulldog Velvet, she’s got a starring role in this one, but for me she steals the scene in every book! I highly recommend this series, it’s become a favorite of mine and again, I’m so glad I found it! Happy Reading!

by Holly AW
Reviewed in the United States on March 17, 2022
Verified Purchase

Val and Roddy DeVere once again find themselves in the midst of murder and more in this 3rd book in the series of Gilded Age mysteries that started with A Gilded Death. This time, the murder takes place at the opera house and Val is more involved than she would like to be. She and Roddy go to great lengths to quietly investigate the death since it’s one of the “new money” folks. As they do so, we once again get a glimpse of life for the well heeled and “old money” families in 1899 New York City. Val also gets involved with working conditions for women in particular, thanks to joining the Consumers League and meeting real life activists Florence Kelley and Mother Jones.

I read this book while also watching The Gilded Age TV show on HBO, and it is fun to see the similarities in portrayal of upper crust life in those days. Ms. Tichi and Julian Fellowes (of Downton Abbey fame) have both done their research on the times. The TV show helped bring to life the book for me, to see and hear the customs and opinions of the old moneyed folks regarding the new moneyed folks (and the costumes are amazing). Val isn’t supposed to walk the streets of NYC unaccompanied because ladies just don’t do that (plus it’s not safe) – Val finds this frustrating and I would too. After all, she grew up in the “Wild West” without such restrictions. But she does her best to fit in, because she loves her husband (who comes from old money although the family needed Val’s silver mine money to maintain their status) and tries to not dismay her mother-in-law too often.

As with previous books in the series, we get to learn more of Val’s history, and we’re treated to several cocktail recipes thanks to Roddy’s quiet work helping various establishments to improve on their alcoholic offerings. Roddy is more active in the sleuthing this time around, and I have to say I was a little disappointed in Val’s demeanor in this book. She doesn’t come across as strong a character as in the first books. My hope is that she will return to form in the next book in the series. There’s also very little of her close friend Cassie in this book, a character whom I find to be quite interesting and would love to see more of in the future.

As with the first books, the mystery is interesting, the writing is excellent, and although the voice is first person past tense (Val’s voice) it doesn’t detract from the story. (My preference is 3rd person past tense voice, but I won’t let a different voice interfere with my enjoyment of a book.) The story is complete and you don’t need to read the first two books to enjoy this third one. If you like period pieces along with a cozy mystery and a peek into a lifestyle most of us will never come close to, with a strong female character and her supportive husband, you will enjoy A Fatal Gilded High Note and the other books in the series. The cocktail recipes are a nice bonus!

I received an Advance Reader Copy of A Fatal Gilded High Note for free, and I leave this review voluntarily and with pleasure.

by Bridget Ball
Reviewed in the United States on March 18, 2022
Verified Purchase

Take a trip back in time to January 1899 where Val and Roddy DeVere are sitting in their private balcony box at the Metropolitan Opera House. Little did they know the events right next to them in rented balcony Box 18 “Coal King” Rankin was being murdered. Surprisingly, Val and Roddy are asked to quietly investigate the case. When police find material evidence Val left at the crime scene she is suddenly under suspect. The stakes are raised high as Val’s lawyer husband Roddy has to convincingly prove his wife is innocent in front of a jury.

A Fatal High Note is an unraveling tale as Val and Roddy track down information about the elusive Rankin and his business competitions with Flager, the wealthiest railroader in town. Cecelia Tichi weaves this mystery and delivers so many thought-out directions and elements with an entertaining cast of characters.

I recommend the book for fans of the tv show A Gilded Age and complicated mysteries. This is the third installment in the Val and Roddy mystery series and I have to confess Roddy has completely stolen my heart and is my newest literary crush. I love how forward-thinking both Val and Roddy are despite their confines of high society that are governed heavily by Mrs. Astor’s strict standards. The historical accuracy of Tichi will appeal to true history buffs and also makes for delightful conversations at your next book club meeting.

I suggest finding a quiet little reading nook to read this book. You will need your thinking cap with this one. Even the most seasoned of mystery and crime fans such as myself will be pressed hard to solve the mystery before the very last page.

by Kate F
Reviewed in the United States on March 17, 2022
Verified Purchase

Another sweet treat in a delicious series!

A Fatal Gilded High Note was a treat. I love the interactions between Val and Roddy DeVere. The world building in this is simply amazing, immersive and lovely.

This was a rollercoaster ride, like most of the series (although you can read this as a standalone, I’d start with one, “A Gilded Death”.) I do enjoy how Ms. Tichi uses the extensive research of the time period to build the story. She surprised me with the progression of the story and the twist at the end. I wish Val was as much of a strong force as I remember from the previous, but, Roddy did take a bit more of a step forward in this.

All together, it is a great read, especially for fans of historical fiction and a good murder mystery!

I received an advance review copy for free, and I am leaving this review voluntarily.

(I received an advance review copy for free, and I am leaving this review voluntarily with great honor and delight!)