What Would Mrs. Astor Do? 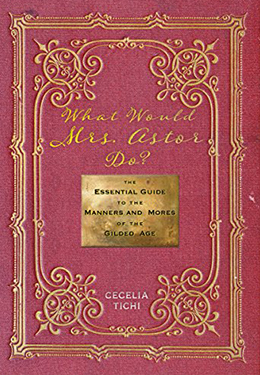 What Would Mrs. Astor Do?: The Essential Guide to the Manners and Mores of the Gilded Age

Mark Twain called it the Gilded Age. Between 1870 and 1900, the United States’ population doubled, accompanied by an unparalleled industrial expansion, and an explosion of wealth unlike any the world had ever seen. America was the foremost nation of the world, and New York City was its beating heart. There, the richest and most influential—Thomas Edison, J. P. Morgan, Edith Wharton, the Vanderbilts, Andrew Carnegie, and more—became icons, whose comings and goings were breathlessly reported in the papers of Joseph Pulitzer and William Randolph Hearst. It was a time of abundance, but also bitter rivalries, in work and play. The Old Money titans found themselves besieged by a vanguard of New Money interlopers eager to gain entrée into their world of formal balls, debutante parties, opera boxes, sailing regattas, and summer gatherings at Newport. Into this morass of money and desire stepped Caroline Astor.

Mrs. Astor, an Old Money heiress of the first order, became convinced that she was uniquely qualified to uphold the manners and mores of Gilded Age America. Wherever she went, Mrs. Astor made her judgments, dictating proper behavior and demeanor, men’s and women’s codes of dress, acceptable patterns of speech and movements of the body, and what and when to eat and drink. The ladies and gentlemen of high society took note. “What would Mrs. Astor do?” became the question every social climber sought to answer. And an invitation to her annual ball was a golden ticket into the ranks of New York’s upper crust. This work serves as a guide to manners as well as an insight to Mrs. Astor’s personal diary and address book, showing everything from the perfect table setting to the array of outfits the elite wore at the time. Channeling the queen of the Gilded Age herself, Cecelia Tichi paints a portrait of New York’s social elite, from the schools to which they sent their children, to their lavish mansions and even their reactions to the political and personal scandals of the day.

Ceceilia Tichi invites us on a beautifully illustrated tour of the Gilded Age, transporting readers to New York at its most fashionable. A colorful tapestry of fun facts and true tales, What Would Mrs. Astor Do? presents a vivid portrait of this remarkable time of social metamorphosis, starring Caroline Astor, the ultimate gatekeeper.

by BDay
Reviewed in the United States on January 18, 2019
Verified Purchase

A thorough overview of NY society in the Gilded Age

I am a huge fan of New York in the Gilded Age so I was really excited when I saw this book, but I did wonder if it was going to tell me anything I didn’t already know. I am not averse to having books that share information, but I didn’t want to rehash everything.

The book absolutely did no disappoint. While there is a lot of information here that can be found in other places, a lot of it was new to me. More important, however, was the variety of information included. I won’t call this the definitive book of it’s kind, but it is certainly thorough.

The author uses Mrs. Astor as an axis for telling the story of society during the Gilded Age, but doesn’t limit the information to the years when Mrs. Astor was at the peak of her reign nor to high society. The book covers every aspect of life from servants and household management to entertainment and political concerns.

I received an electronic copy of the book in exchange for an honest review. But I loved it so much that I ordered it in hard copy.

by Kathy Edens
Reviewed in the United States on July 27, 2019
Verified Purchase

A fun read with a dash of history thrown in

I thoroughly enjoyed this book, not just for the social history of the NYC Gilded Age inhabitants, but also for some true historical facts thrown in. For example, did you know that elevators existed as early as 1859? Granted, they weren’t very safe since the cables often broke, but they did exist. Then Elisha Graves Otis, invented a safety harness which prevented the cage from plummeting down. It was operated hydraulically until 1889 when electricity was used to power them. And electricity was becoming quite common in business and in residences for lighting well before the 1900s. And telephones were considered useless when first invented for anything other than business. Who would want to speak to a box in the wall instead of face to face? I wonder what people of that time would think today if they saw masses of people staring at their hand held phones instead of having a conversation with the person with whom they shared a table in the restaurant?

The social history is well covered also, discussing everything from leaving calling cards to what restaurants ladies could be seen in at what time of day. How a gentleman could address a lady he meets on the street, what drinks were popular. and even the evolution of lobster as haute cuisine. In today’s hyper casual lifestyle, these rules might seem shallow and burdensome, but then knowing the rules for behavior made it easier to navigate among the society that existed at the time. Think Downton Abbey on steroids.

If you have any interest in how people lived during the end of the 1800s and into the beginning of the 1900s, this book is for you. It is fun but also informative and you might just come away with an appreciation for an era long gone.